This is a small design remix I did, re-imagining Studio Ghibli’s Howl’s Moving Castle characters in the form of fragrance.

I had actually been watching this animation with my sister for the hundredth time when this idea hit. I was admiring the beauty of it all and began to quickly brainstorm internally how I could mould this with design, after a few options, I landed with fragrance. While as an industrial design student I explored many different types of products, I never had the space in my schedule to take anything dedicated to packaging. Fragrance was something I was always fascinated by but never even scratched the surface of until now. The form isn’t complicated to the point where I MUST use SolidWorks to save my life. it’s heavily graphic which suit my technical constraints well.

To have some framing for the project, I decided to use the theme of seasons. For the characters, I chose Howl Pendragon, Sophie Hatter, Calcifer, and Turnip Head. 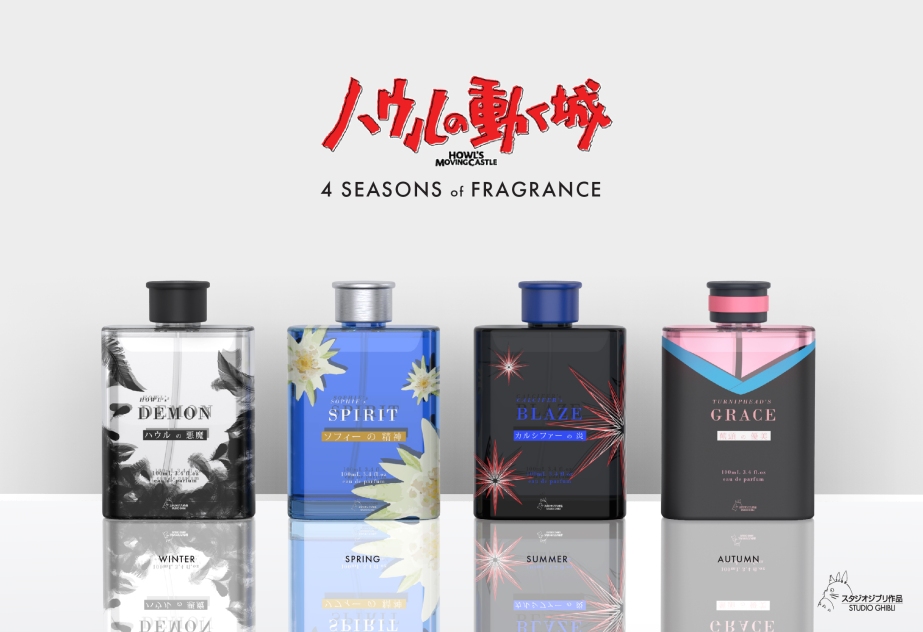 While figuring out how to represent each of these characters, I tried to break down characteristics of them both visually and internally as well. 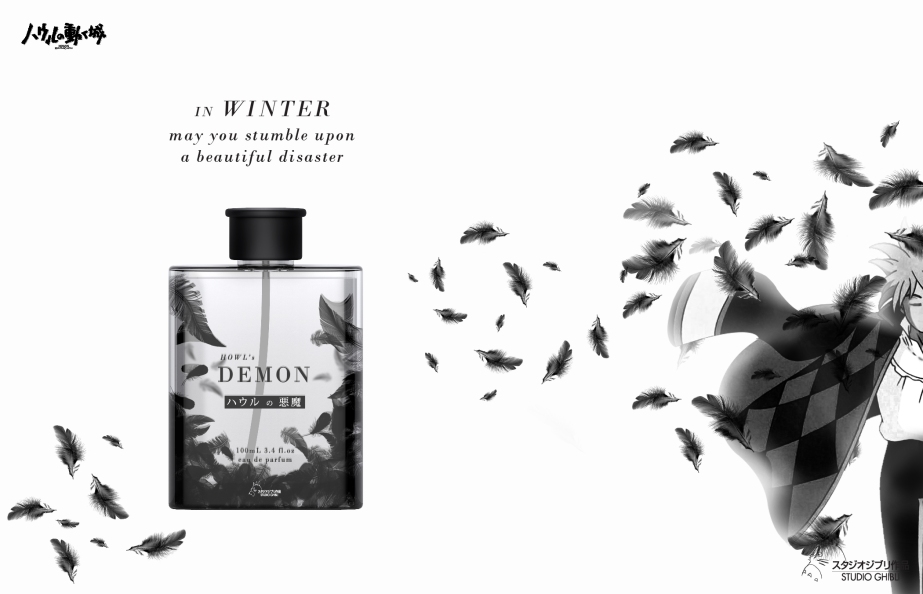 One of the things that is most iconic about the character, Howl the wizard, is his alter form of a winged beast that’s essentially his demon. He had bound himself to Calcifer, the demon, by giving him his heart in exchange for Calcifer’s power. This power allowed Howl to excel in the art of sorcery but also put him in danger. His winged form, while very powerful, if transformed into too often, will eat his mind away and he will become completely soulless. I chose a visual cue of Howl rather than something from his personality because quite frankly for much of the movie, he was childish and shallow. After trading his heart to Calcifer as a kid, he seemed to have developed emotionally very, very slowly in some aspects.
Howl’s bottle took the longest to design. I had many different versions in both colors, opacities, and design. Each version also had a different layouts of feathers of different orientations. I’m surprised my old Sony Vaio was able to hold up with the complexity of the graphics (each feather was a vector). 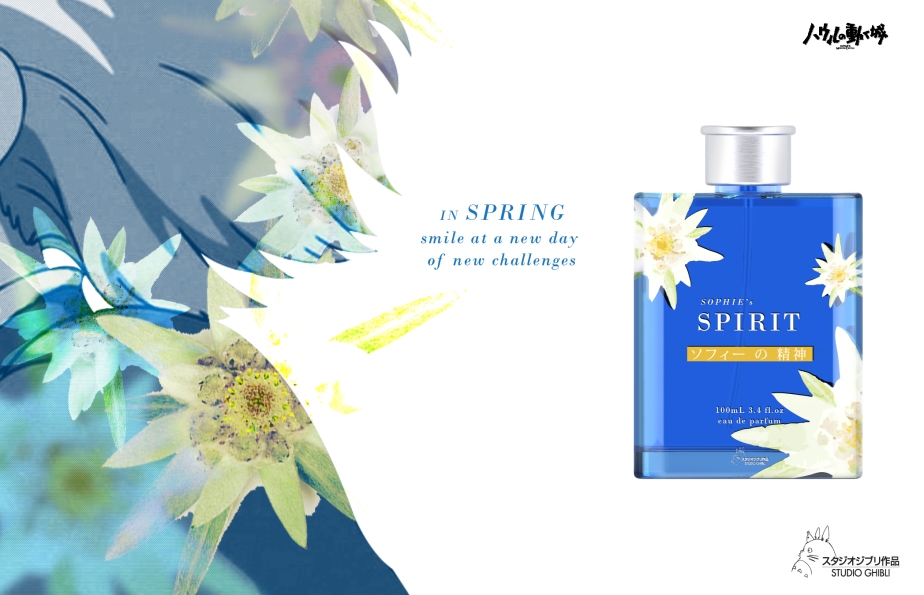 Like a fresh breath of spring air, Sophie was a symbol of strength and pungent hope in the story. She had unconditional kindness for all beings even the Witch of the Waste who turned her into an old lady. I used the edelweiss flower to represent this beauty and spirit. Edelweiss flowers grow in the most rugged conditions in high mountain tops and have often been raised as symbol of rugged beauty. Despite Sophie’s insecurities with how ordinary she thought she was, it never stopped her from moving forward even in the wake of disasters.
Sophie’s perfume design was more straight forward. I had picked up a blue base from her iconic blue dress in the movie and played around with edelweiss graphics until choosing this one. The bottle was originally opaque out of convenience for Photoshop and Illustrator but it didn’t really look like perfume or give off the fresh feeling I wanted so I sucked it up and changed it to translucent.

Calcifer was the flame(literally) that fueled Howl’s moving castle. Because of his contract with Howl, he was bound to the fireplace of the castle. Despite being small, his personality was bigger than the castle and he had a flare to him that really made the movie especially memorable. I placed him in the season of summer to match his sass!
Calcifer’s perfume design took a little more experimenting. It would have been a bit too cheesy to put literal flames on the bottle so I had to find other visual cues. When the movie flash backs to Howl’s childhood, Calcifer is actually in the form of a falling meteor AKA shooting star. I grabbed elements of the form and transformed it into a graphic.

Last but not very least, I bring you autumn with Turnip Head. Turnip Head is a scarecrow that is silent throughout the whole movie but can move and interact with others. He seems totally random at first but is always there to support Sophie as she struggles to deal with her situation. Turnip Head is actually Prince Justin under a spell. The prince is from a neighboring kingdom and was thought to have been kidnapped. Despite being alone, he similarly to Sophie had an unconditional kindness and was always eager to help even if it meant he got hurt.
Turnip Head was full of visual cues, the trick was coordinating it well so the perfume bottle doesn’t turn out looking like a circus. I wrapped the bottle in a graphic as if it was wearing a tuxedo like Turnip Head and accented the cap with a pink band as a gesture to the ribbon on his top hat.